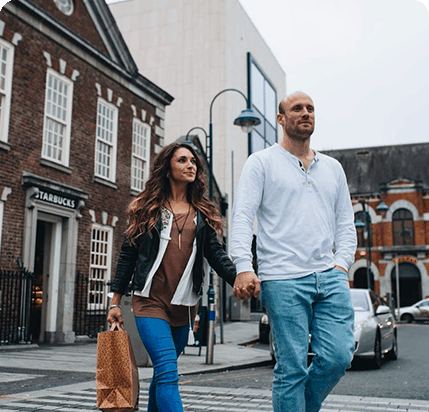 Looking for things to do in Cork city…?

You’ve time to spare in the city. Rather than being bored out of your (robot) tree hanging around Paul St. We’ve compiled a list of real Cork experiences and things to do in Cork city. We have everything from War of Independence anniversary tours to feeding the local wildlife in the city centre.

Experience the real and amazing Cork city with these free (or low-cost) immersive experiences and things to do including adventures like hearing the tales behind the city’s most popular attractions, taking a leisurely bike ride, or partying it up during a local festival.

Strolling around the city today. You’d be forgiven for thinking that Cork has always been a peaceful town. Little would you know that 100 years ago the streets were erupting with violence.

With roaming gangs of British military and police looting, shooting and burning their way through the city. On the other side was a group of plucky Republican volunteers. Members of what was then known as the IRA. Conducting raids, ambushes and using hit-and-run tactics against the – much larger in number – crown forces.

This walking tour is an immersive experience bringing you back to the days of the Irish war of independence 100 years ago.

Now for something a little more sedate. After experiencing the highs and lows of the war of independence tour. Why not get up early in the morning and visit the English Market Grey Herons?

These local Cork residents congregate outside the English Market in the heart of the city early every morning. In the hopes of begging for some free fish from the fish delivery men in the market. Indeed they are such a regular sight. The English Market caretaker has named them all.

Bring along some fish for the birds if you’d like. Yes. They do eat canned tuna. Alternatively, visit the famous fish merchants the day before and stock up on fresh fish pick and mix.

These hungry local fishermen only attend the market for fish deliveries. Which happen around 5.30 AM. So set your alarm clock early and visit the city centre. For more info on this Cork city experience – pls. click English Market Grey Herons.

Looking for a way to pass the time in the city? Want to see the sights and experience one of the world’s largest natural harbours?

Why not take a bike ride on the Coke Zero bikes? One of the best things to do in the city!

These bikes are available to rent for locals and tourists alike. The first 30 mins are free. With only a small charge per half hour after that.

For more info on how you can register to rent a Coca-cola Zero bike. Pls, click Coca-cola zero bike Cork.

The walking tour of Shandon covers many of Cork city’s top attractions. Everything from Shandon Church to St. Finbarr’s Cathedral.

The Walking Shandon tour is free and available to anyone with a smartphone and headphones. Take a tour through the streets of the city and be transported back to the days of old.

Hear the stories about Cork’s oldest attractions. That only locals know.

One of my favourite things to do in the city…

Similar to the English Market Grey Herons experience above.

The Herring Gulls are migratory birds. So, they only appear in the city during the winter months, unfortunately.

However, if you are lucky enough to see them on the banks of the River Lee in the city. You can have fun for all the family watching them take flight.

When better to experience Cork city, than during a local festival?

They say the Irish know how to throw a party. Well if it’s a party you are looking for. We have many, many of them in Cork city.

Among the annual festivals in the city. There are gems such as the St. Patrick’s Day parade, Cork Heritage Week, Cork Harbour Festival and many, many others.

So, when you have time to kill in the city. Make sure to check out these free (or low-cost) experiences for yourself. All these off-the-beaten-path experiences are all true, rebel city adventures.

Whether you are a local, an Irish tourist, or an international tourist. You’ll won’t beat Cork when it comes to real adventure – from the real capital.

2 thoughts on “6 Outstanding things to do in Cork city – to pass the time.”